How the language of politics and pressure for high TV ratings fails the vulnerable and oppressed.

Hidden beneath the 24/7 daily news reels and reality show comparisons of American politics and the culture and social wars taking place between the Dems and GOP, the plight of those abroad has often been conveniently forgotten or whittled down to a five-minute sound bite. Sides are often taken and those in opposition to our own hegemonic interests are labelled instigators, outsiders, and enemies of the state. We treat them as commodities to be brokered and traded, often ignoring the magnitude of a given situation and turning it more into an all-out gladiator contest between competing world powers instead of a comprehensive look at how state unrest and civil conflict have become common themes throughout the world. 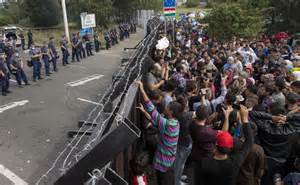 Europe has been experiencing one of the largest mass migrations of refugees to date and yet we barely blink an eye – only crying foul when the image of a drowned child is blasted across social media. Forget the fact that over half of all refugees are children and that one third of all refugees live in a protracted state of displacement – some as long as 24 years. While the number of refugees in the world has doubled to over 50 million, politicians and the media fail to address the underlying causes and instead choose to view those fleeing for their lives with mistrust. Labelled illegals, job-killers, and even potential terrorists, they are rounded up like herds of cattle, boxed into cars, and shipped to wire-fenced enclosures, old prisons, and crumbling WWII labor camps for “safe keeping”. These types of actions do not address the issue at hand. We should be welcoming these groups and offering a helping hand, because when we place them into an undetermined period of displacement we are only exacerbating issues of growing poverty, lack of education and basic health services, and a perception that these individuals are really just second class stateless citizens. 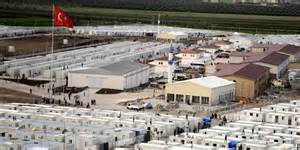 Syria’s civil war alone has produced one of the largest current groups of displaced people at 7.6 million IDPs and just over 4 million refugees. Camps have been set up in Turkey, Jordan, and Lebanon, yet they are unable to keep up with the growing numbers. The United Nations has deemed the crisis as “the biggest humanitarian crises in the Modern Day era” but as it has faded from the public eye so too has much needed humanitarian funding. The UNHCR and partnering organizations, such as the World Food Program (WFP), have been unable to keep up with the needs of the displaced as large majorities already suffer from malnutrition and many children are forced to abandon school to work to supplement the household income. Instead of reaching out a helping hand, many responsible nations have failed to deliver the funding needed to keep up with this global crisis Instead of a handful of cash fingers are pointed in all directions, finding someone to blame.

When Syria is mentioned in the news the stories do not address the poor and vulnerable but the power struggle between the West and Russia and who will control the ISIS narrative. For decades, up until very recently following the 9/11 attacks, Arab, Islamic and groups associated as such have been framed as the bad guys. When we use the term dictator or rogue state the prevailing image is one of an older Arab man in a turban yelling expletives against the West. A terrorist is a young Arab man with a full beard. This type of imagery and discourse has become so incredibly common that when there is a school shooting or possible bombing the initial assumption is that it was an act perpetrated by an Islamic extremist. And it is this narrative that we use when viewing the conflicts around the world, especially those in the Middle East and North Africa.

Take the Israeli-Palestinian conflict. Israel continues unprecedented illegal settlement building, crackdowns on religious freedom and movement, and an institutionalized bully mentality that turns a blind eye to human and civil rights violations of its Arab and Palestinian citizens. And yet in recent weeks the call for a “stop to violence” can be heard loud and clear across political party lines; not in response to the years’ of growing violence against Palestinians in the Occupied Territories but in response to a dozen or so stabbings on the streets of Israel’s Tel Aviv and Jerusalem. The narrative being crafted around the growing violence is one of an isolated incident or the coming of a third intifada. 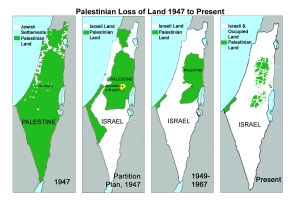 Loss of Palestinian land due to illegal settlement expansion and occupation.

Rarely does the news contextualize these incidents within the broader history of the conflict. And when speaking with people it is appalling to realize that more often than not people do not understand or even know that Israel has been occupying land illegally with the stated intent to eradicate the Palestinian population for the better part of 50 years. Once again the Middle East peace process is framed as a struggle between our beloved Israeli friends and those “Arabs” and not one of the oppressed fighting back against the oppressors as frustrations and despair mounts.

When we allow a select group of people and media outlets to frame conflicts and crisis as an us against them mentality, then we ultimately lose. How can groups of people and nations trust us to negotiate on their behalf or offer a balanced approach when we have already pushed their plight aside as one that isn’t interesting enough or important enough to our own principles and policies? Is anyone really surprised that President Abbas declared that Palestinians are no longer to abide by U.S.-led peace accords when Israel blatantly violates them? For years we have promised peace yet fail to act as a true mediator by allowing Israeli settlement expansion to go unchecked and refusing to welcome in other parties such as the Arab League that have a much bigger stake when it comes to Middle East peace. What this comes down to is the matter of messaging. 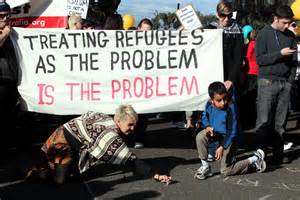 Just as with any policy or social movement, the way we frame issues and how we discuss those involved ultimately impacts whether or not we are successful in the end. And until we start looking at those who have been displaced, jailed, oppressed or marginalized as human beings who have an equal share in this world then we will continue to fail them and the world will become increasingly unstable and conflict-ridden.

← Not A Distraction: How dress codes enforce gender-policing and those fighting back
Anyone feel like going on a run? →