Not A Distraction: How dress codes enforce gender-policing and those fighting back

It’s a powerful statement and one that has been born out of a growing movement against the “Dress Code Wars” popping up across the country and abroad. Every year this debate gains steam right around Spring – when the weather turns hot and the idea of teenage girls switching from jeans to shorts or skirts and from long-sleeved tops to tanks ignites a crackdown on what many deem as unacceptable and titillating attire. But this year there has been a resurgence in the Fall as more and more teenage girls have banded together to protest dress codes in which the messaging targets and shames girls while leaving the boys untouched and faultless.

Echoing the norm “boys will be boys”, dress codes have increasingly targeted girls as the sole responsible party for keeping teenage boys in check. And while schools have every right to educate their students as to the acceptableness of social attire while balancing the need for self-expression, the policing of teenage girls and their bodies only reinforces the stereotype that boys are unable to tame their sexual desires and that a girl’s body is a distraction that must be managed. 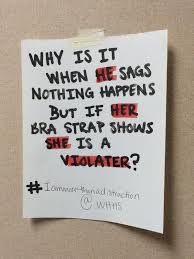 Oftentimes girls are pulled in front of the class and slut shamed before being told to leave school. Forced to miss class at the detriment of their own education and made to feel objectified, teenage girls are starting to push back.

One of the most common phrases used in school dress codes is that the clothing girls wear is “too distracting.” A New Jersey school banned girls from wearing strapless dresses to prom because they were “distracting,” while another school reminded parents that the dress code forbids girls from wearing leggings because they “too closely defined” their “backsides” and thus are “highly distracting.” At a winter dance at Capistrano Valley High, girls were subjected to full body inspections before being let in. Asked to walk and flap their arms in front of school administrators, many of the girls stated that the whole process felt demeaning and boarded on sexual harassment. They either spent hours waiting to be let into the dance or were told to go home and change because their dresses were too “distracting.” One of the more disturbing stories is that of Clare. In a blog post Clare gives a detailed account of her experience at Richmond Homeschool Prom. While the only stipulation was that her dress hangs at fingertip length or longer, a criterion her dress easily met, she was still forced to leave the prom after a group of dads on the balcony above complained that her dancing was “too provocative” and her dress too short. During the whole experience Clare felt objectified by the dads and shamed by the school administrators.

It’s not difficult to read the underlying message here – it’s not what the girls are wearing that’s the real distraction, it’s their bodies. Examples of dress code enforcement, like the ones above, demonstrate the underlying belief that a woman does not fully own her body; and as soon as something she wears or does is deemed improper and distracting then society must step in and right that wrong. Instead of constantly telling girls to cover up and that the onus to act properly lies with them, wouldn’t it be better to educate the boys not to objectify their peers?

Last year a group of school girls in New Jersey started the #IAmMoreThanADistraction social media campaign as a way to highlight school dress codes that unfairly targeted girls over boys. Another girl in Canada was made to stand in front of her class and shamed for wearing shorts that failed the fingertip test. Her reaction? To paper her school with flyers, which read “Don’t humiliate her because she is wearing shorts. It’s hot outside. Instead of shaming girls for their bodies, teach boys that girls are not sexual objects.” 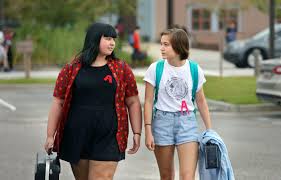 This year another group of girls in South Carolina started a similar campaign Not ‘A’ Distraction, targeting the messaging and language that school administrators use while enforcing the dress code. Having been told that if they dressed a certain way they would be “asking for it” or “selling themselves”, the girls adopted a bright red “A” as part of their slogan – a not too-subtle salute to The Scarlet Letter. Like Hester Prynne who was forced to wear the letter as a symbol of shame and sin, these girls are using the letter to fight back against the slut shaming and negative messaging they must endure simply because of their natural female form.

When people choose to victim-blame teenage girls for boys’ reactions to their bodies they are reinforcing the idea that they should be ashamed of their bodies and that if boys leer or make inappropriate and sexually harassing comments and overtures then they are the ones at fault, not them. This type of sexist messaging is the same used in rape culture where the first questions asked are “what were you wearing?” and “were you drinking?” Not only does it force girls to feel guilty for their natural curves but it conditions to boys to victim-blame women for their actions as well.

I am not saying that all dress codes are sexist or that dress codes should be banned altogether. There is a place for them. You wouldn’t wear a bathing suit to a work meeting in an office just as much as you wouldn’t wear torn jeans to an upscale restaurant. But there is an issue in this country that when dress codes, specifically high school codes, are enforced that administrator actions and messaging often only apply to girls and target them for the behavior of their male peers.